The Bitcoin network and the entire crypto industry became widespread and popular largely thanks to decentralization. Decentralization is the backbone of today’s crypto industry. Without it, cryptocurrencies would be like the usual electronic payment systems that already existed.

However, one can often see or hear reasoning like, “Bitcoin is truly decentralized while other cryptocurrency blockchains are not”. Or one can stumble upon discourse like, “Proof-of-Work consensus algorithm is truly decentralized while Proof-of-Authority, Proof-of-Stake and their derivatives are used to centralize influence of certain people in the network”. These are myths we’re debunking today. We’ll also discuss decentralization in the UMI network. But first, let’s see what decentralization is and why we need it.

What Decentralization Is and Why We Need It

Decentralization is a process wherein there isn’t a single governing body. Why is it so important?

For instance, if authorities of a country wish to disable a cryptocurrency network, they can at most make miners within their national borders turn off their equipment. Will it have an impact on the network on the global scale? Yes, but not too much. Network speed will slow down, but only for a limited time and on a limited scale.

In the crypto industry, decentralization is based on blockchain technology and various consensus algorithms. Blockchain is a chain of blocks containing recorded data. Blockchain’s special feature is that data added to it cannot be modified or removed. In case of cryptocurrencies, data mean details of coin transfers from one address to another. Decentralization and blockchain technology allows us to achieve the following: a transaction that was once submitted cannot be canceled or reverted. At least, this is what theory says, though it’s a little more complicated in practice, but we’ll discuss this later.

To reiterate, in the end it should work as follows:

Now is the right time to remind you of the situation that occurred in the Bitcoin network in August 2010. On August 6, some users noticed an error that allowed anyone to bypass verification and submit a transaction with any number of BTC at the output. As a result, on August 15, an unknown user sent 184 mln bitcoins to themselves. In a few hours, the transaction was noticed by developers who disabled the network, removed the flawed transaction from the blockchain and released the amended version of the client. So much for the blockchain’s inalterability that can actually be violated if one really wants to do it. The story of disabling the blockchain and removing the transaction is not something much spoken about as it would shatter the illusion of Bitcoin network’s decentralization and blockchain’s eternal inalterability.

This is the first point, the second being the role of mining pools. In their pursuit for profit, miners lend their computational power to the pools that now control the lion’s share of Bitcoin network’s hashrate. 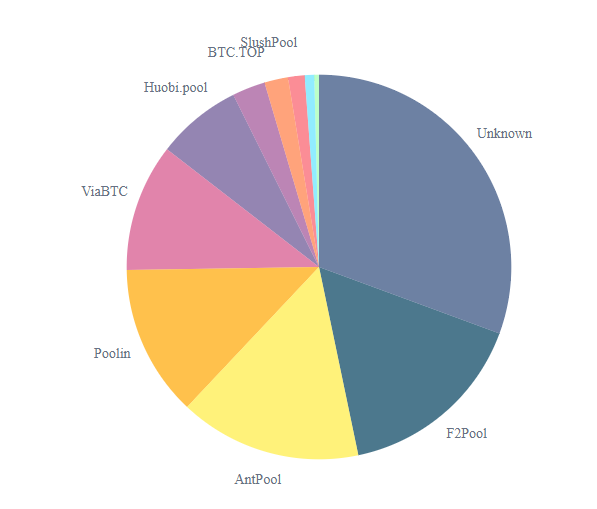 Over a half of Bitcoin network’s hashrate is accounted for by one country — China.

Thus, Bitcoin network’s proverbial decentralization is not actually a truly strong argument in favor of the first-ever cryptocurrency since over a half of its hashrate is controlled by a single country. And the inalterable blockchain can actually be changed if one wants to do it and has the tools.

As far as Ethereum is concerned, it’s not as smooth either. We’re not touching on the mining pool issue here, even though this problem is also important for the Ethereum network. Let’s discuss another thing. Ethereum network was initially based on the PoW consensus algorithm, but developers announced — almost instantaneously — they were going to switch to PoS. To prevent miners from messing with updates, developers integrated the so-called “difficulty bomb”. Difficulty bomb is a special algorithm that, once activated, slows down system operations causing system freezing in the end.

Now miners have no other option except updating their software to the current release all the time. Even if developers introduce changes contradicting miners’ interests, they have no choice.

Thus, decentralized Ethereum is actually governed by a centralized group of developers.

It’s the first thing. It’s also worth remembering the context of Ethereum Classic emergence. This cryptocurrency was launched in 2016 after the smart contract of The DAO decentralized autonomous organization had been hacked. The DAO worked in the Ethereum network and owned a pool of ETH coins awarded to developers to promote various apps. The pool was formed by users. This is how it worked:

At some point, a hacker managed to find a vulnerability in the smart contract and to steal coins worth of $50 mln from The DAO’s pool. Developers had a choice to make:

In the end, they opted for a hard fork. In other words, they altered the inalterable blockchain to get the stolen coins back. However, some Ethereum network users disagreed with this decision as it violated the blockchain’s key rule — inalterability. Some developers and miners refused to participate in this and update their software continuing to work with the blockchain network’s old version. This is how Ethereum Classic emerged. It means that today’s Ethereum is actually a fork of the Ethereum Classic network.

Despite transaction rollback in the network, Ethereum continues to operate successfully. It’s now safe to say that users actually don’t need blockchain’s decentralization and inalterability; otherwise, demand for Ethereum would fall to near-zero immediately after the hard fork.

Proof-of-Stake suggests that the network is governed by holders of the network’s native coin. Anyone can buy a certain number of coins, launch a node and become a validator. They will participate in all processes: verify transactions, add them to the blockchain, make decisions on changing network operation rules, etc. However, developers of PoS-based cryptocurrencies usually keep a large number of coins, thus accumulating power in their hands. Let’s turn to Ethereum again. When this cryptocurrency was launched, developers generated 70 mln coins. For your reference, current ETH emission volume (6 years into network operation) amounts to 116 mln ETH. It means that developers now control the network using the difficulty bomb, and switching to PoS will allow them to control it by accumulating a large number of coins in their hands.

Even if developers of a cryptocurrency do not own the lion’s share of coins and distribute them among users, anyone who has an adequate amount of resources can buy coins from the market and gain control over the network.

Let’s now discuss Delegated Proof-of-Stake (DPoS) as the latest consensus algorithm. DPoS means power is fully transferred into the hands of selected validators. How does it work? All owners of network coins vote for a group of validators to be responsible for network operation. In this case, network management is actually exercised by a limited number of people. EOS is based on the DPoS consensus algorithm and is often criticized for its over-centralization as only 21 validators validate blocks.

Another example of popular centralized blockchains is Binance Smart Chain (BSC). Blockchain developed by Binance crypto exchange has been accumulating users over the last few months. Many projects migrate from Ethereum to BSC looking for cheap transactions. Fees in the BSC network are really a lot lower — dozens of cents, sometimes as high as $1–$2.

However, Binance Smart Chain is also criticized for its over-centralization. It’s built on a symbiosis of Proof-of-Stake and Proof-of-Authority consensus algorithms and is called Proof-of-Staked Authority (PoSA). The community criticizes it for BSC network operations are only supported by 21 nodes each of which is affiliated with Binance.

How decentralization works in UMI blockchain

What about UMI? UMI cryptocurrency is based on an improved Proof-of-Authority (PoA) consensus algorithm. We’ve already talked about it in much detail in one of our articles. But we suggest we briefly go over it.

PoA is similar to DPoS — there are selected master nodes that are responsible for network safety. However, there’s a key distinctive feature — master nodes are selected by UMI Team rather than users. It prevents competition of master nodes, among other things. As a result, the network can handle dozens of thousands of transactions per second, consuming virtually no resources.

Master nodes must comply with stringent rules to make them as efficient as possible. They are located in various parts of the globe to ensure maximum decentralization, but names of master node holders and their locations are not disclosed to prevent anyone from exerting influence over them.

There’s more. UMI blockchain network took it a step further — it did not just use PoA as is; it used this consensus algorithm as a basis and improved it by adding validator nodes. The nodes verify transactions for correctness before adding them to the blockchain and actually control operation of master nodes and make sure the game is played by the rules. At the same time, a validator node can be launched by any UMI network user.

Let’s sum it up. Is PoA consensus algorithm “truly” decentralized? Of course not. Just like any other consensus algorithm. UMI network also has a group of stakeholders represented by master nodes that support cryptocurrency network operations. However, UMI is a lot more efficient in terms of capacity as it can handle dozens of thousands of transactions per second with no fees. Fees in the UMI network are not low as in other networks like BSC or EOS — UMI network has no fees whatsoever!

Why then use a clearly inefficient consensus algorithm if the proverbial decentralization promised in Whitepapers by developers is non-existent? There’s no point. But don’t jump to conclusions just yet.

Do you remember we spoke of two key aspects of ideal decentralization at the beginning of the article? Elimination of human factor impact (i. e. network must be governed by multiple network users rather than a single person or company) and lack of a single rollback point (i. e. no centralized body that could disable the network). So, first, master nodes are owned by a pretty large group of people, not just the UMI Team, and their operations are carefully monitored by validator nodes. Second, in terms of a single rollback point UMI is truly decentralized — master nodes are distributed across the world and if someone wants to disable UMI network, they will have to disable the entire World Wide Web.

In the end, Proof-of-Authority consensus algorithm in the UMI network ensures the same level of decentralization as with any other cryptocurrency while also eliminating all the negative aspects of other consensus algorithms. In the UMI network, users can run instant and completely free transactions. And there’s no single rollback point which means no one can disable the network. If a communications watchdog or any other regulator disables most master nodes tomorrow, nothing will happen with your coins. You most probably will not notice they have been disabled.

This is why we often say that UMI is a cryptocurrency of the future. It’s incorporated all advantages of decentralization with no illusions while also eradicating all decentralization drawbacks ensuring high capacity, zero fees and utmost convenience for users.

Almost 12 years ago, Satoshi Nakamoto used blockchain to create the Bitcoin network. Back then, no one knew this technology would change the world....

Greetings from the UMI Team! Our Whitepaper describes in detail the key pros and cons of the two mechanisms which the great majority of other...

As you likely know from our website and Whitepaper, the UMI network fully uses the blockchain technology to ensure its users with supreme security...